Two live sessions are completed. Please scroll down to watch the videos from the recordings below. SEG members, view the course for free!

In this lecture, I will give an overview of the seismic attenuation processes and provide a comprehensive study of attenuation mechanisms in two very different scenarios, citing the case studies carried out in Utsira Formation in Sleipner field the North Sea and the Deccan Basalt in India. In the first case study, I will show the evidence of frequency-dependent attenuation using seismic low-frequency shadows (LFS), occurring due to the presence of diffusive fluids like CO2 in porous reservoir rocks. I will further explain the mechanism of occurrence of LFS and its applications in sweet spot detection, using diffusive viscous equations. Further, the possibility of poroelastic modeling of a CO2 flooded reservoir, to demonstrate Biot’s slow P-wave as a highly attenuated diffusive phenomenon at low frequencies, will be discussed. In the second case study, I will mainly focus on the non-fluid related attenuation mechanism observed in Deccan Basalt of India using dry rock laboratory experiments, carried out at ultrasonic frequencies. The anomalous results obtained by this study will be explained by the petrological investigations carried out on the basalt core samples. Further, the need for visco-elastic seismic modeling of Deccan basalt will be explained for an improved imaging of the sub-basalt structures. 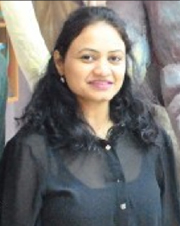 Nimisha Vedanti received M.Sc. (Tech) in Exploration Geophysics from Banaras Hindu University, Varanasi, India, and PhD (2007) from Osmania University, Hyderabad, India, while working as a Junior Scientist at CSIR-National Geophysical Research Institute, Hyderabad, India. She held a postdoctoral position at the University of Texas at Austin, USA (2007-2008), and worked as CSIR-Raman Research Fellow at the Department of Geoscience, University of Calgary, Canada in 2016. She has been a visiting scientist at the Norwegian University of Science and Technology (NTNU) and SINTEF Petroleum Research, Trondheim, Norway, under Indo-Norwegian Collaboration Programs (2005-2006 and 2010-2013). She had short research stay at the King Abdullah University of Science and Technology, Saudi Arabia during April 2018.

Nimisha was the Indian project coordinator for the Indo-Norwegian collaborative projects that focused on the ‘4D Seismic Monitoring of In-situ Combustion Process in Balol Heavy Oil Field, India’ and ‘Feasibility Assessment of a CO2 EOR process in Ankleshwar Oil Field, India’. She led these projects in collaborations with NTNU, SINTEF, and the Oil and Natural Gas Corporation of India under a tripartite agreement signed under the aegis of Norwegian Embassy in India.

Presently, Nimisha is senior principal scientist and in-charge of Shallow Seismic Group at CSIR-National Geophysical Research Institute, Hyderabad, India. Her group is carrying out 2D/3D seismic surveys for exploration of Coal Bed Methane and Shale Gas in the Gondwana coal fields of India. She is also leading two research projects focused on the assessment of sedimentary basins of India for CO2 EOR and sequestration. These projects are supported by the Department of Science & Technology, Govt. of India and Natural Environment Research Council, UK. She is also serving the Academy of Scientific and Innovative Research, India as a Professor.

Nimisha’s early-career work was focused on the theoretical aspects of geophysics, where she modified the convergence of Occam’s inversion algorithm and developed a non-linear scheme for inversion of DC resistivity data. Later, she initiated a systematic study for Deccan basalt imaging that includes laboratory investigations and the development of seismic modeling algorithms under the CSIR-SHORE project. She has published more than 60 articles and co-authored a handbook titled Fractal Models in Exploration Geophysics published by Elsevier Science under the ‘Seismic Exploration Series.’

Nimisha is a recipient of many prestigious awards, including the ‘National Geoscience Award’ given by the Ministry of Mines, Govt. of India, ‘Young Scientist Award’ given by the Council of Scientific and Industrial Research(CSIR)-Ministry of Science and Technology, Govt. of India, ‘Krishnan Medal’ by the Indian Geophysical Union, ‘KR Gupta Medal’ by the Geological Society of India and Indian Science Congress Association’s Young Scientist Award.

She is the lead coordinator for the theme ‘Geological Sequestration of CO2 and Enhanced Oil Recovery’ during the forthcoming 36th International Geological Congress (IGC) 2021.

Understanding seismic wave attenuation mechanisms in porous and non-porous media: Some new insights
Available in days
days after you enroll