Generalized sampling and gradiometry: Changing the rules of the information game

Please note that three sessions of the same lecture will be given at different dates listed below.

Three live sessions are completed. Please scroll down to watch the videos from the recordings below. SEG members, view the course for free!

Recording seismic data involves moving from a continuous signal to a discretized data representation. The rules governing sampling of bandlimited signals and their reconstruction were pioneered by Swedish-born mathematician Harry Nyquist who studied transmission of telegraph signals in limited bandwidth channels in the 1920s. Together with Claude Shannon among others, both at Bell laboratories, he laid the foundations of information theory. The Nyquist-Shannon sampling theorem states that a bandlimited signal can be perfectly reconstructed at arbitrary points in between samples from an infinite sequence of equidistant samples provided that there were more than two samples per minimum period when the data were sampled. The Nyquist-Shannon sampling theorem of course applies to seismic data sampled on the Earth’s surface as such data are bandlimited constrained to a cone in the frequency-wavenumber domain bounded by the minimum velocity at the recording locations. The less well-known generalized sampling theorem by Athanasios Papoulis from 1977 teaches that if different filtered versions of the original bandlimited data (filtered before sampling/decimation), the classical Nyquist-Shannon sampling criterion can be less strict. The generalized sampling theorem has direct applications for acquisition of exploration seismic data for instance resulting in considerable efficiency gains in the acquisition of surface seismic data. In addition the topic of simultaneous source acquisition can be described in a generalized sampling theorem context.

Similar to acquisition efficiency advances offered by the generalized sampling theorem, wavefield gradiometry also benefits from different data types (combinations of spatial gradients) of the underlying wavefield that are exploited to derive information that would not be available in conventional wavefield recordings (e.g., to determine whether recordings correspond to P- or S-waves, determining slowness of arrivals, etc.). Recently, an increased interest in rotational seismology is one example of wavefield gradiometry advances.

Starting with the pioneering work by Harry Nyquist, I will discuss acquisition and processing of seismic data. I will focus on recent developments building on Papoulis’ generalized sampling theorem including examples from signal-apparition-based simultaneous source acquisition as well as seismic data acquisition on the moon and on Mars where logistics is severely limited benefitting significantly from advanced multi-measurement acquisition with foundations in wavefield gradiometry. 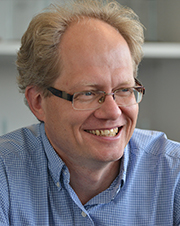 Johan Robertsson received an M.Sc. from Uppsala University, Sweden, in 1991 and a Ph.D. from Rice University, Houston, Texas, in 1994. He spent 1995 and 1996 as a postdoc at ETH in Zürich, Switzerland. He then joined Schlumberger in 1996, where he spent 15 years in various R&D and management positions in Cambridge (UK), London, and Oslo. In his last assignment with Schlumberger, he was the research director of geophysics and scientific advisor at Schlumberger Cambridge Research. Since 2012 he is professor at ETH where he holds the Chair of Applied Geophysics and leads the Exploration and Environmental Geophysics (EEG) group. In 2015, he received the Eni “New frontiers in hydrocarbons upstream award” together with former colleagues from Schlumberger. In 2016, he was awarded an ERC advanced grant from the European Union and also founded Seismic Apparition GmbH. In 2018, he received EAGE’s Conrad Schlumberger award. Prof. Robertsson’s research interests include seismic acquisition, simultaneous source separation, wave-equation-based processing, physics of wave propagation, and full-waveform modeling. He has held various offices with SEG, EAGE, and RAS.